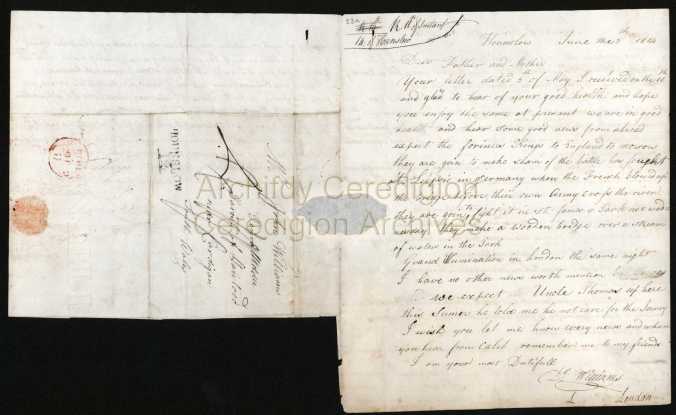 Your letter dated 5th of May I received on the 10thand glad to hear of your good health and hope you enjoy the same at presant we are in good health and hear some good news from abroad expect the foriners Kings to England to morrow they are goin to make sham of battle has fought at Leipsic in germany when the French blowed up the bridge before their own Army cross the river they are goin to fight it in St. James s Park nex wednesday they make a wooden bridge over a stream of water in the Park

I am your most Dutifull

Your favourable letter Dated 5th of Instant came to our hands on the 11th of the same, your Mother is often in a sickliness state. I are in the same maner.  Will is Bonnily I Desire these lines will find Relations in Hounslow as they wish it to be,

We recive a letter from Caleb the same Day as yours on the 11th of Instant from Aberavon in glamorganshire and there they are now Laoding Bark for Limrick in Ireland he was twice over the British chanel  since last Micholmas  once in France and often in Spain Every time from Ireland this is the first letter we had of him after he return last, I think he  will  go through s aprentisship before he come home to see any of us,

Here is a new sport begin this year in the nighbourhood, under the name of Bridelgreen and Races, and Ran last whitsun Monday being the 30th of May and to  be  continued yearly on the same Day by a subscription, they Did Ran this year for a Sadle and Bridle. Doctor Bevans of Cardigan’s horse win the sadle, Mr  Griffies Pantgwyn of Cardiganshire horse win the Bridle. there was two Mules Ran for five guineas and several other Horses Ran there for wagers in the field John Griffith  Pentre  between Gundun and Rhiwsaison

Mr Hassall of Killriwe was Buried on the 12th of Nov’br  last. Mr  Lloyd of Bronwidd agreed and Mrs Hassell the widow to quit Killriwe next Micholmas and to have £250 yearly so long the Lease will last, only life of Charles Hassall was the Lease, He the said Charles Hassall Hanged himself at night in Llapiter Cardiganshire about a month ago. he deprived himself of life and [hi]s sister in law of 250|3  yearly so long as his life lasting. his life would last if he give fair play to it a while, Mrs  Hassall is come to Tygwin next Micholmas

Colonel James Pantsaison threaten the people of Killgeran for the street he is to raised and paved this Summer The old Major James of Place lawrence finished a good Mill in Rhyduvantoon with two par of stones. Broyan Mill is not gain much by that we fail to have grass at Pantsaison that maks we go to Pantadery and had it

your Mother want to know what is your wages and how do you live, Will want to what work you Doing and is much company working at the same place

write soone and Remember to my Brother and Sister

Fear God and honor the King no more at present 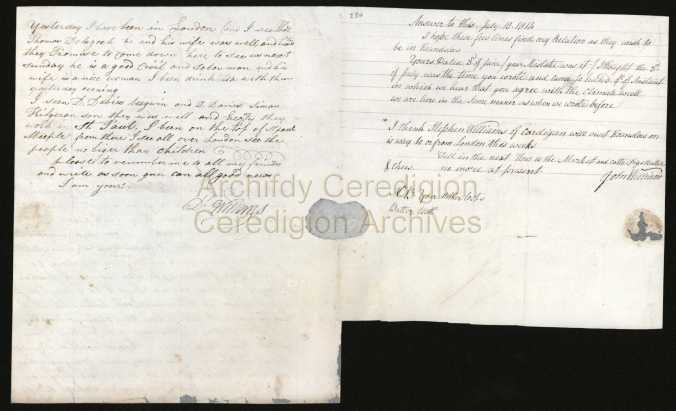 Dear Father and Mother, I take this Opportunity to write these fue lines to you and hope to find you in good state of health as we are at presents, and to inform you I received your letter Dated the 18thon the 22nd and glad to heard  from  you,

Uncle and Aunt enjoy a tolerable good health at present, and I get a better health now than ever I have, I not been an hour sick since I part from there thanks God,

My wages is but 5s 3d per Day and I live pretty well upon it I not want nothing at present this work not seems to go on as well in peaceable time as he dis in war they talk about stop the Engins next week, I am work in millwright line, Here is about 8 Carpenters, 5 millwrights all the mean in work in the yard they are above 60.

I have the pleasure to see Empror of Rusha King of Pursha and his sons Old General Blusher and his sons the Old man shook hands with all the Ladies was near him when they chaing o Horse is, I see that Day what never seen in England before no less than three Crowned heads together and young Prince of Orenge and many more foreigneres they all went down this way to Oxford they say King of Pursha put  two of  his sons in school there

I seen D. Davies teegwin and D. Davies Simon Kilgeran son they was well and hearty they work in St. Paul, I been on the top of st. paul Steeple from there I see all over London see the people no biger than children –

Tell in the next How is the Market and catle Pigs Butter & chees. no more at present